At 6:30 p.m. on a pleasant evening of 22nd March, a flustered Kishor Pathare trudged into Snehalaya’s CHILD LINE and complained that their own neighbor Santosh Dethe, had molested his 11-year old niece child Shweta. This shocking news was indeed even more amazing, especially because Kishor is known to be a former member of CHILD LINE! Don’t child-molesters know any dread or shame? Snehalaya’s CHILD LINE co-ordinator, the indefatigable Kundan Pathare, speedily formed a team consisting of the ever-ready CHILD LINE team-members : Abdul Khan, Shahid Shaikh, Somnath Bargal, Sunil Mohite and the perceptive counselor Ms.Vrushali Bhalerao, The team immediately set off to launch an intervention operation at the molested child’s home in Astagaon.

Vrushali accompanied the terror-stricken child to a separate room, comforted her and slowly & sensitively explored the delicate matter of the recent trauma. Shewta tearfully narrated her tale beginning with how Santosh would stalk her every day on her way to school – passing comments and teasing her. She had mentioned this to her uncle Ganesh, who apparently had brushed it off as a non-issue, failing to perceive the grave threat to the innocent child, in this real world of remorseless child-molesters. Eventually Monday 18th March, when Shweta was happily on her way to school as usual, the emboldened 32-year old Santosh cunningly lured Shweta away from the road, saying he had some nice gift for her. He led the uncomprehending unhesitant child into an empty tin-shed near his home, fondled her and on increased demented arousal, ripped off Shweta’s under-pants. Can a 11-year old child ever withstand the brute strength of a 32-year old man crazed with lust? It was an Act of Providence that Shweta managed to escape from a certain painful rape. She hurried back to the only safe haven she could think of - her home. She wept all day recalling the horrors, magnified by the ignorance at her tender age, and finally lapsed into silence when all her tears dried up. The family only knew that she had come home crying instead of going to school, until Kishor stumbled on the possible cause. On gleaning full information about Shweta’s ordeal, Vrushali asked the family why didn’t they report the heinous crime. They hesitantly replied that they were ashamed and afraid of the consequences of the exposure resulting from reporting the disgusting crime. Their entire family would be disgraced!

After reasoning with them, Shweta (accompanied by her mother and grand-mother) was escorted to the Supa Police station, where an FIR (First Instance Report) was filed against accused under IPC 354, 504 and 506. The surprised Santosh was immediately arrested and the court remanded him to police custody. Snehalaya’s CHILD LINE will follow-up diligently to ensure that justice is finally done, and to instill apprehension in other potential child-molesters. Don’t forget to dial Snehalaya’s CHILD LINE toll-free number : 1098 at any time to rescue children in distress - even when they are not your own! 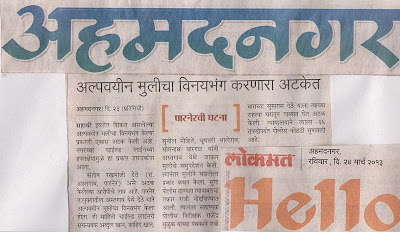 Posted by Snehalaya at 2:15 AM