On the scorching afternoon of 26th February, a couple of workers of the Jakat Naka at Solapur road noticed a dejected lady along with two equally miserable girls looking completely lost – as if searching for someone who isn’t there. On discovering that the ladies speak some unknown language, with incredible presence of mind, the workers promptly dialed 1098 for Snehalaya’s CHILD LINE - and graciously accompanied the frightened ladies to CHILD LINE office. God indeed works His wonders in mysterious ways! The CHILD LINE’s Sunil, in the meanwhile, summoned the multi-lingual CHILD LINE volunteer Rohit Kodam for interpretation. Apparently, the Telugu-speaking Mrs. Laxmi Wadelu (along with her 16-year old sister Sujata and her 7-year old daughter Sushila) had embarked from Hyderabad in search of her husband Siddhu Wadelu, who supposedly was working as a laborer somewhere in the Ahmednagar vast M.I.D.C. area. Siddhu’s whereabouts were unknown, his cell phone unreachable and the penniless ladies had no means to return home, and no clue on what to do next. Since Siddhu remained untraceable, to ensure the safety of these ladies in distress, the CHILD LINE team contributed sufficient funds and bid farewell after putting the relieved family  on board a bus to Hyderabad. Thanks to the good Samaritans and timely intervention of Snehalaya’s CHILD LINE, the imprudent participants of this potentially dangerous misadventure, are now safely back home. 1098 is a phone number worth noting – where timely aid is merely a phone-call away!! 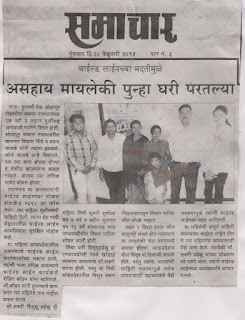 Posted by Snehalaya at 10:41 PM No comments:

The entrapment of Janabai Kate: A tale of two wives & police apathy exposed!


The 28-years old Geetanjali’s ordeal began soon after her unfortunate marriage to Satish Gayke on 15th August,2009; being inhumanly tortured by her husband in connivance with her in-laws for a Rs.4,00,000 dowry to finance the greedy in-laws plans to build a new house. This was an astronomical amount for her poor 60-year old helpless father Shivaji Aware. The cycle of torture, being banished, return to more torment therefore continued unabated devoid of any marital meaning. On 20th January, 2013; Geetanjali set off again to meet her husband at Shevgaon City (Ahmednagar district), to plead for mercy. She was stunned to learn from a neighbor that the heartless Satish had surreptitiously “married” the 13-year old teenager Janabai Sheshrao Kate (a student in the IX standard of Kanya High School, Brahmangalli) in August, 2012; in a local temple and re-christened her Nandini Satish Gayke! The childlike Janabai’s hard-up parents, who slogged as laborers, had been led to believe that Satish is a wealthy divorcee. In the dawn of teenage itself, Janabai’s bright future was thus cut short. And Geetanjali was as if “widowed” – though her lustful husband still remained alive. Despairingly, Geetanjali returned to her maternal home at Bhaygaon. On the same day, the frantic Shivaji came to Snehalaya’s CHILDLINE for aid, to save the hopeless Geetanjali from utter ruin - or even worse. Wheels were set in motion. By 23rd January, sufficient prima facie evidence was pain-stakingly gathered to prove the occurrence of this secretive illegal second marriage and to thwart it. This included Janabai’s birth certificate, Geetanjal’s wedding invitation, marriage certificate, complaint letter, witness testimonies etc. The CHILDLINE Team (Co-ordinator Kundan Pathare, Asst. Co-ordinator Abdul Khan, and team-members Shahid as well as Vrushali, led Geetanjali and her father to Shevgaon Police station to register a complaint. Inspector Amle and Sub-Inspector Bajrang Chowghule directed Head constable S.D. Mahanor to accompany the CHILDLINE Team to Satish Gayke’s residence, where the child-bride Nandini and her father- in-law Uttam Gayke were taken into custody. A message was left for Satish Gayke, instructing him to report to Shevgaon Police station immediately.
Wonders never cease where autocratic men in uniform rule the roost. While CHILDLINE sought to take the rescued Nandini to the Child Welfare Committee and also for a medical check-up, the Inspector Amle thoughtlessly ordered that the child be sent back to her impoverished maternal parents. CHILDLINE’s Kundan demanded filing a case under the relatively more stringent IPC 494 (Illegal second marriage: Punishment with imprisonment for a term which may extend to seven years, and shall also is liable to fine). However the two Inspectors in all their infinite collective wisdom chose to file the case under more lenient IPC sections 498 (A) Domestic Violence : Husband or relative of husband of a woman subjecting her to cruelty, 232 - Punishment for voluntarily causing hurt, 504 - Intentional insult with intent to provoke breach of the peace, 506 - Punishment for criminal intimidation and 34 - Acts done by several persons in furtherance of common intention. Nevertheless Snehalaya’s CHILDLINE remains committed to ensure that justice will certainly be done to the suffering wives, in spite of the complicity of some officials and clout of the offenders. SATYAMEV JAYATE!!
Posted by Snehalaya at 10:34 PM No comments:

As mentioned in our previous report on the rescue of Sonali, on 15th February, the Observation Home Superintendent had arbitrarily denied shelter to Sonali’s siblings in dire need of care & protection.  This had led to Ms. Suvarna Kulkarni and another staff-member Ms.Medha Deshmukh of Snehalaya’s CHILDLINE to lodge a strong complaint with the District Women and Child Development officer
Mr. Chandrashekhar Pagare (who immediately provided shelter to the desperate children). This shocking incident, glaring lapses and the arrogance of the Superintendent widely reported by the local press, evoked spontaneous reaction in other NGOs as well as the local populace, who took to the streets in support of CHILDLINE. Infuriated crowds gathered at Snehalaya’s CHILDLINE office (opposite Chitra Talkies, Ahmednagar) to express strong solidarity, and marched to the District Women and Child Development office in Sarjepura and then on to the Child Welfare Committee Office. The protesters vociferously demanded an investigation of the entire incident and formally submitted a petition to the District Women and Child Development Secretary Mrs.Pathan, seeking strict action against the aberrant officials for their sheer negligence. The irate citizens also demanded filing a case regarding the premature death of a new-born baby at the Government Shelter Home in Karjat! (Snehalaya’s Snehankur centre maintains an unblemished record of zero mortality of new-born infants in its care). Snehalaya’s CHILDLINE thus became a rallying point for ordinary people who demonstrated that they have reached the limits of endurance. The message of the good citizens is that they will no longer tolerate the anguish of tormented children caused by the beastliness of selfish government officials whose very raison d’etre is just to provide shelter. Remember to call  CHILDLINE toll-free number 1098 anytime, anywhere, when any distressed child needs help. Snehalaya’s CHILDLINE is equipped, geared and willing to promptly provide succor to suffering children.

Posted by Snehalaya at 9:36 PM No comments:

midnight rescue of a brutalized girl-child! SNEHALAYA’s CHILDLINE in action


On 14th February, Snehalaya’s Asst. Secretary Anil Gawade was awakened near midnight, by a frantic telephone call from a concerned citizen Vikas Gandhi. The caller sought Snehalaya’s urgent intervention to stop the brutal torture of 11 year old girl Sonali Bhoite by her own aunt Surekha More in the Dhavne Vasti of Ahmednagar.  Anil instantly alerted Snehalaya’s CHILDLINE whose on-call services are available 24 X 7. Snehalaya’s CHILDLINE’s night-duty officers Somanth, Ramesh & Vrushali swung into action to rescue Sonali.  The terrified child’s agonized screams shattered the stillness of the peaceful night. The cruel aunt was viciously thrashing the defenseless child after stuffing Red Chilli powder into her eyes & tender private parts. Sonali’s only fault was apparently not doing house-work well enough! Which raises the question - what house-work services are required at midnight? Or were there other hidden ulterior motives for such horrendous child-abuse? Nevertheless, within an hour, the battered girl was rushed to the Civil hospital for emergency treatment. The team stood vigil till the child’s admission to the Pediatric Ward. Anil & Shahid took custody of Sonali’s younger siblings hiding out in the neighborhood. With police assistance, Surekha was arrested the next day. The tragic episode didn’t end here. On 15th February, the Observation home Superintendent Kulkarni condescendingly refused to provide shelter to Sonali’s siblings. Hence Snehalaya lodged a complaint with the District Women & Child Development officer Mr. Chandrashekhar Pagare, who immediately provided shelter to the distressed children. Sonali was eventually discharged from the hospital on 20th February after painful convalescence.  Snehalaya’s representatives accompanied her to the Child Welfare Committee, and finally all the three innocent kids were provided shelter at the District Probation & After-Care Association. Thanks to the dedication and persistence of the CHILDLINE team, these helpless children are now in safe hands, content knowing that help from Snehalaya is just a phone-call away. 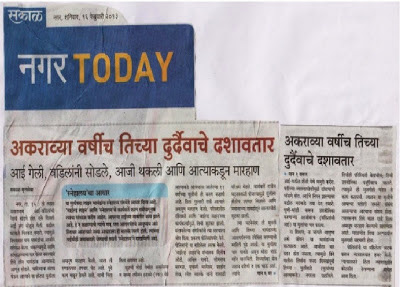 Posted by Snehalaya at 4:11 AM No comments: