Snehalaya’s childline comes to the rescue of a brutalized girl-child! 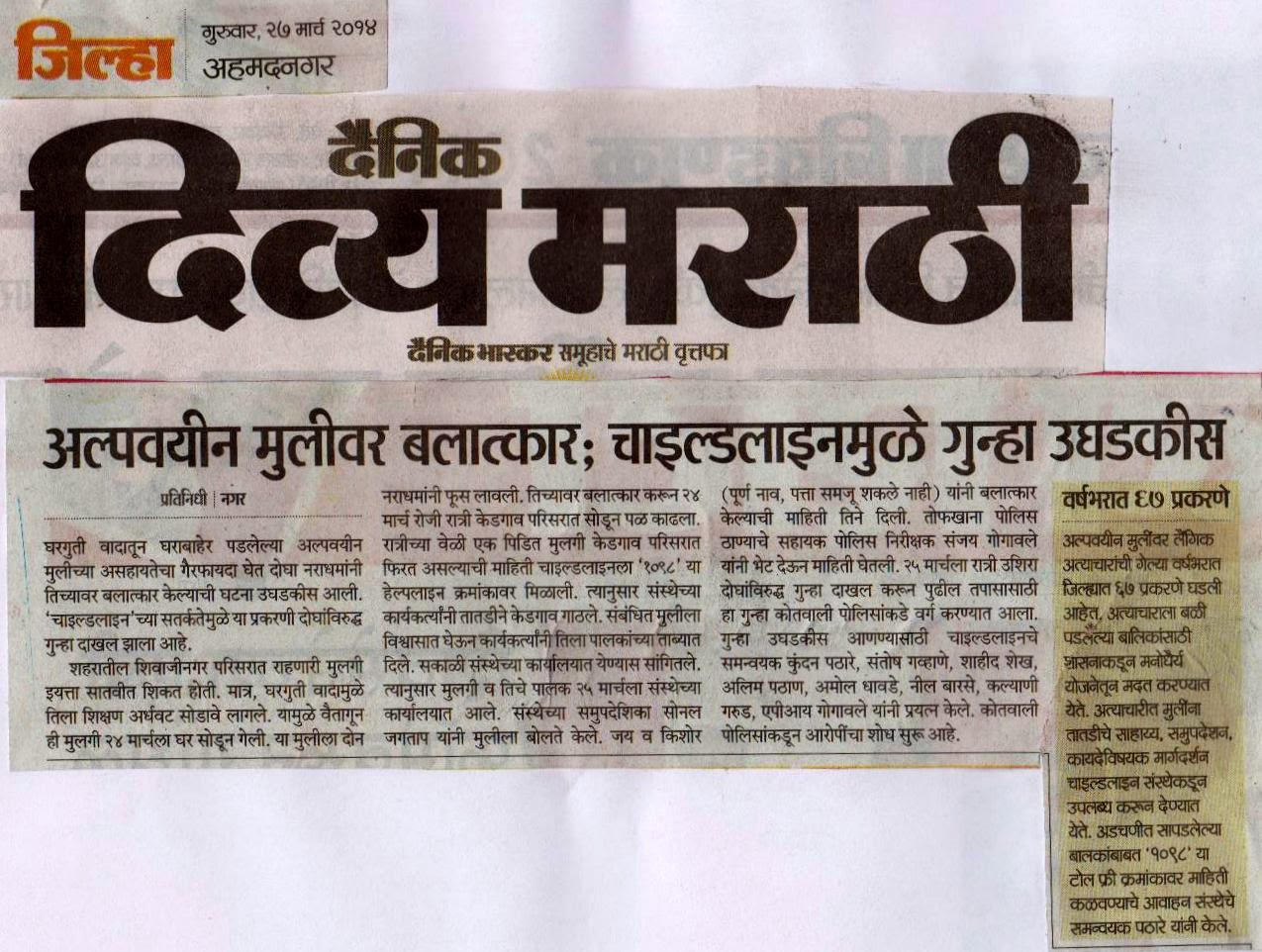 Snehalaya is a collaborative organization of the national network of Child Line in Ahmednagar dist. This unit of Snehalaya is working 24x7 for the protection of child rights since last 12 years.

On 24th March, 2014 the Child Line members on night duty were out patrolling. They got a call about a girl in distress at an isolated spot in Ambikanagar, Kedgon (Ahmednager). The Child Line team-members rushed to the spot and discovered a terrified girl-child. After comforting her gently, the young girl managed to convey her parent’s contact details at Shivajinagar (Ahmednagar). Since it was late at night, the team-members handed over the daughter and requested a meeting the next day.

At Child Line’s office the frightened girl was counselled. She reluctantly revealed the entire sordid story of being stalked by 3 big boys, being threatened and finally being brutally gang-raped. Asst. Police Inspector was contacted and the victim was accompanied to the Topkhana police station along with her parents. The F.I.R of the case was registered under IPC 366, 376, 506, 34 and POCSO (Protection of Children from Sexual Offenses). Child Line team-members urged the police to arrest the cruel rapists immediately. Childline is providing all support to the victim.

Remember to call  CHILDLINE toll-free number 1098 anytime, anywhere, when any distressed child needs help. Snehalaya’s CHILDLINE is equipped, geared and willing to promptly provide succor to suffering children
Posted by Snehalaya at 2:34 AM No comments:

A happy care-free girl child girl lived with her parents who do farming. The father is hearing-impaired. Due to financial constraints she studied only till 7th Std. and then had to quit school when she was barely 13 years old.

At this vulnerable stage she came into contact with a 26 year old man. He threatened and cajoled her into a forcible sexual relationship and subsequently blackmailed her for further sex. She soon became pregnant never realizing the serious predicament till her mother noticed the seven month pregnancy in the 14 year old daughter. The mother finally persuaded the poor girl to narrate the entire sordid story of sexual abuse.

The shocked mother visited the boy’s home and tried to reason with them suggesting that marriage with the pregnant girl was the only solution. The mother & son asked for more time to sort out things. The boy then took away the girl to get the pregnancy aborted. However, the doctor declined in view of the advance stage of the pregnancy. Eventually during this harrowing ordeal, the girl delivered the baby at home. And the baby girl became one year old. However the father’s delaying tactics did not cease. Eventually the abused minor girl was left holding a one year old baby daughter. The uncaring man finally refused marriage point-blank.

The frustrated girl finally sought police intervention. However the police recommended that the victimized girl and the boy ought to compromise since they both belong to the same caste, and refused to register a formal complaint.

The parents of the girl finally approached “SPARK “for help. Spark is the group who work on social issues. They follow-up with the local police for 3 days without any progress. SPARK representatives finally contacted Child Line for help on 12th March, 2014. Snehalaya’s ChildLine team (Hanif Shaikh, Sunil Mohite, Kalyani Garud, Shahid Shaikh, Ajay Wable) went to Akole and met the SPARK group and counseled the victim. They then met the local Police Inspector Mr. Khandre, who requested more time saying that he is new on the job and would have to study the case. Sunil Mohite finally called the Deputy Superintendent of Police Ms. Thakur and requested her personal intervention to initiate quick action on this matter. Mr. Khandre was in turn instructed to file the case based on the girl’s statement. And the cruel child molester was arrested under IPC 376 and Protection of Children from Sexual Offences Act- 2012’s Sec. 3 and 5. The girl was provided shelter in the Snehalaya’s Snehankur project.
Posted by Snehalaya at 10:24 PM No comments: