Kidnapped in shirur & saved in sangamner!


Snehalaya’s CHILD LINE’s well-known phone no. 1098 rang once again at 10.30 a.m. on Sunday 10th March. The caller Mr.Bharat Bhosale informed the co-ordinator Mr. Kundan that returning home late the previous night, he had noticed a very young couple sleeping outside the closed “Dhaba.” Considering the potentially dangerous surroundings in this high-risk locality, he enquired about their origins, and was told that they were newly married runaways who wished to settle down in Sangamner. The good Samaritan graciously took them to his own home for the night, and called 1098 the next morning.
Kundan accompanied by the ever-ready Ms.Vrushali and Mr.Mangesh immediately rushed over and met the three of them. The 14-year old girl Komal tearfully confessed that they were actually unmarried, and the 28-year old man Ashok had persuaded her to run away from her home in Shirur, and lured her to Sangamner promising. Vrushali consoled the girl lovingly and gently explained the facts of life, about love and lust, and the perils of accompanying a relatively unknown male, to an area notorious for prostitution - where terrible untold dangers await the unwary. The innocent misguided girl realized her grave mistake and earnestly requested help to rescue her from this disaster.
The CHILD LINE team-members contacted the Shirur Police station, who confirmed that Komal is indeed missing, and agreed to come over to Sangamner along with Komal’s parents. Since Ashok had already used the minor girl, the Asst. Police Inspector of Sangamner police station Mr.Bharbale arrested Ashok for kidnapping and rape of a minor girl. Ashok is suspected of having lured the girl of an impressionable age to Sangamner for coerced prostitution.
The lucky Komal, was handed over to her relieved parents to renew her normal teenage life again. All expressed their heartfelt gratitude to Snehalaya’s CHILD LINE for their professionalism. Our team thanked Mr.Bharat Bhosale for his good deed and also God for the numerous opportunities to serve the unfortunate children in distress.
CHILD LINE is a life line 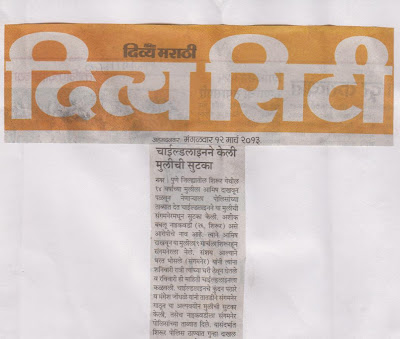