At 3.15 p.m. On 7th March, Snehalaya’s CHILD LINE received a mail from the CHILD LINE INDIA FOUNDATION City In charge Hemant More, reporting the rape of a 8-year old girl Ms. Yewle (nicknamed Babu) from Padali Aale village, (Taluka Parner, AHMEDNAGAR district), and admittance into a hospital  at Aale Phata (Paware/Aware hospital),by her terrified parents. The alleged 70-year old rapist (having the same surname Yewle) is a retired Head master of the Zillah Parishad School, and apparently with enormous political clout and well-connected with the police officials and the NCP.

Moving swiftly, Snehalaya’s CHILD LINE quickly chalked out an action plan. Kundan, Vrushali along with Abdul and Shahid first met the Dy. Superintendent of Police Mr. Barkund, who sent them onwards to Police Inspector Mr. Someshwar at Parner police station. He in turn arranged a telecom with the Police Inspector Mr. Nirbhay who was out on his rounds. As a result, accompanied by a Police Sub-Inspector as well as two constables, the CHILD LINE team reached Padali village by 8 p.m. After cautiously surveying the locality, the team approached a group of playing children, offered them sweets and discreetly enquired about Babu’s situation and location. The children mentioned that Babu’s injury has led to her being absent from school since the last four days. The team visited Babu’s home; Vrushali had a heart-to-heart chat with Babu in complete privacy. The puzzled Babu confided that her aged relative (uncle of her father) had inadvertently hit her below her abdomen (private part), while trying to strike a dog. The perplexed parents also separately confirmed the same. Babu is the darling of a loving family. The team was taken to the unjustly accused’s home, where the rape perpetrator was discovered to be a senile, bed-ridden 84-year old person! His astonished family was distraught on realizing the reason for the team’s visit.

By this time his enraged well-wishers and village elders including the Sarpanch gathered and vociferously expressed their displeasure over tarnishing the reputation of an innocent gentleman, and the situation took an unpleasant turn. The outraged villagers also shouted that they would never tolerate such heinous crimes, if ever perpetrated on the daughters of their village. The team-members explained Snehalaya’s CHILD LINE’s role, obligations & commitment, and distributed relevant pamphlets, which soon pacified the agitated mob.

This cause of this incident is apparently a conspiracy to malign the Yewle family. His family members could have filed a case of harassment or even a defamation suit. Thanks to the Snehalaya’s CHILD LINE team’s handling this sensitive matter diplomatically, the matter was resolved amicably and the team returned back to the office at around 1:30 a.m., awaiting the next call for assistance. 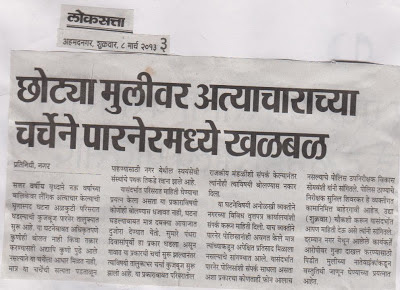 Posted by Snehalaya at 4:34 AM