Snehalaya’s Snehankur Project’s Ajay Wable called up Snehalaya’s CHILD LINE co-ordinator Kundan Pathare regarding a child rape case in Dakhangan area involving a 14-year-old child, lured away by her own relative with promises of marriage. Kundan along with Vrushali reached the Nagar Taluka Police station where she unsuccessfully tried to communicate with the girl, Damini, who chose to remain sullenly silent.

The child’s mother was more co-operative, and so were some family members. However, the stories were non-corroborative and inconclusive. Damini refused to answer queries from both D.S.P. Anita Jamadar as well as Police Inspector Ashwini Patil. Finally Vrushali managed to persuade the younger brother Vinod Dhirwade to shed some light on the confusion.

It was revealed that their relative Chandu Pawar works as a contractual brick-maker at Pashan Road, Pune. During Chandu’s visits to Dakhangan, his mother would call Damini over to sleep with Chandu, who sexually exploited the misled girl.

It so happened, that Damini’s mother got hospitalized, and her father had to stay in the hospital to tend to her. Her elder brother was busy with his own affairs and her younger brothers were too innocent to know what was happening. Being promised marriage Damini would sleep with Chandu every night, who used her well with his own mother’s connivance! On her return from the hospital, Damini’s mother was horrified to know about the girl’s nightly absences. When she took up the matter with Chandu’s mother, Damini threw tantrums. This made matters worse for the entire family.

Eventually, Damini’s family had to go to Parner where the advanced stage of pregnancy was visibly noticed, and the physician confirmed pregnancy. In spite of repeated attempts, Chandu refused to marry Damini and with his family’s support he disappeared. Damini’s family then asked Snehalaya’s CHILD LINE to help out. After verifying the facts again, a case was filed against Chandu (and his mother for being an accessory in the crime) under IPC section 376 and THE PROTECTION OF CHILDREN FROM SEXUAL OFFENCES 2012 under section 3 and 4. The hunt is presently on to trace Chandu. Snehalaya’s CHILD LINE will relentlessly track down Chandu to bring him to justice. 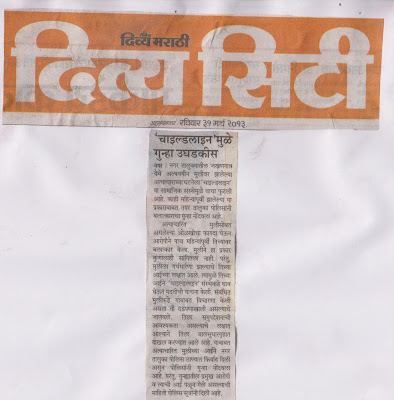 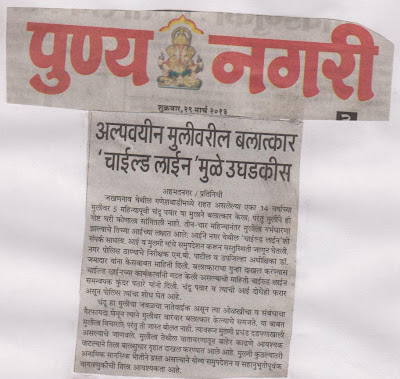