Exploitation of Children at an Ashram Shala!?!


Mr. Sanjay Tambe the Director of Dr. Babasaheb Ambedkar Ashram Shala at Talki Kandeshwari in Karjat Taluka, owns a hotel run by his father-in-law Mr. Arjun Chavan.
It transpired that about a year ago, a poverty-stricken couple admitted their children aged between ten to twelve years to the Ashram Shaala. The children supposedly studying in the sixth class were forced to work in the hotel all day, where they were quite often beaten up mercilessly. Some concerned citizens reported this blantant use of children as child-laborers to the Karjat Police. On 27th March at 11p.m., Snehalaya’s CHILD LINE team- member Alim Pathan received a call from the Karjat Taluka Police seeking intervention for two young children from an Ashram Shala.
Alim along with his team-mates Ramesh Salke and Vrushali Bhalerao immediately set off for Karjat and took custody of the children by 2:30 a.m. A case against Mr. Arjun Chavan for coercing the helpless children to work in his hotel as waiters was registered at the Karjat Taluka Police station.
The team-members also filed a case against the Mr. Sanjay Tambe under Child Labor Act 1986 : Section 3/14 and under Juvenile Justice Act 2000 : section 23 and 26. After completion of the legal formalities, the team-members accompanied the children to the Child Welfare Committee at Ahmednagar. The committee admitted the children to District Probation and After Care Association. Thanks to the alert citizens, the co-operative police and Snehalaya’s CHILD LINE, two more children were rescued from cruel child-abusers. Whenever we come across children being abused, the simplest thing to do is to call up Snehalaya’s CHILD LINE toll-free number : 1098. They are geared and willing to take immediate action. Help is just a phone-call away! 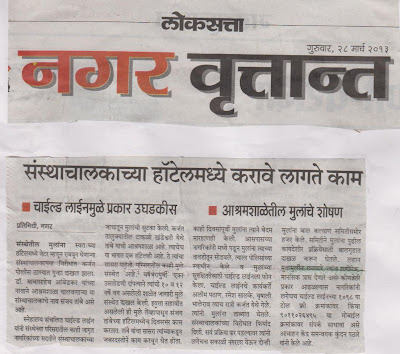 Posted by Snehalaya at 2:18 AM